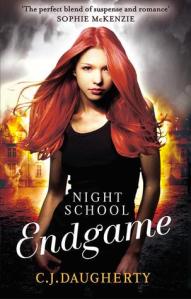 The spy is gone but the cost has been high – the rebels at Cimmeria Academy have lost their leader and Carter West is missing. Nathaniel can taste victory. But Allie and the other survivors aren’t done yet. First they have to get Carter back. Then they plan to make Nathaniel pay.

The final book in the Night School series.

Finding refuge at a secret location in the south of France, Allie almost convinces herself she’s safe – until Nathaniel’s guards attack. Then she’s on the run again, and forced to return to the one place she can truly call home: Cimmeria Academy.

But when she arrives, she barely recognises it. Tensions are on a knife edge. Now most of the students have deserted the school, the teachers can’t be trusted and guards are in charge. Worse, Nathaniel is close – very close – to getting everything he wants.

Desperate to do something – anything! – to stop him, Allie agrees to accompany Lucinda on a dangerous late-night mission. But in doing so, is she putting her friends’ lives at risk?

Carter and Sylvain are both ready to fight by her side – and prove their love. Allie knows she must make up her mind once and for all about who she really wants. No one will wait for ever.

The time for indecision is over. Everything is at stake and winner takes all… 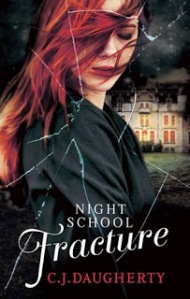 Devastated by the loss of her friend and under constant threat from an unknown spy at Cimmeria Academy, Allie Sheridan is finding it hard to cope.

In Fracture, the third book in the Night School series, she’s not the only one losing it – everything is falling apart. And when Nathaniel begins to reveal his game plan, Isabelle starts to lose control.

As the school slides into a deadly morass of paranoia and suspicion, everyone is guilty until proved innocent. Anyone can be held without proof, and convicted without a trial. No one is safe.

This time Nathaniel doesn’t need to hurt them. This time they’re hurting themselves.

In the last year, Allie’s survived three arrests, two breakups and one family breakdown. The only bright point has been her new life at Cimmeria Academy. It’s the one place she’s felt she belongs. And the fact that it’s brought dark-eyed Carter West into her life hasn’t hurt either.

But far from being a safe haven, the cloistered walls of Cimmeria are proving more dangerous than Allie could have imagined. The students and faculty are under threat, and Allie’s family – from her mysterious grandmother to her runaway brother – are at the centre of the storm. Allie is going to have to choose between protecting her family and trusting her friends. But secrets have a way of ripping even the strongest relationships apart…

Sex in YA is controversial. Because many YA readers are young, as a writer, you have to be incredibly careful in how you handle it.

There’s so much to consider: How old should characters be when they do it? Should they do it at all? If you write sex into your novel are you endorsing teen sexuality? Creating peer pressure that could encourage teens to have sex before they’re ready? Ruining their lives?

Frankly, it’s a quagmire many of us are eager to avoid.

Besides, even if you do decide to take the plunge, let’s admit it – there’s something inherently hilarious about writing sex. It’s all ‘he touched this’ and ‘she stroked that’ then ‘the lights darkened and she forgot everything…’

Personally, I just can’t face it.

Luckily, you don’t have to write sex to write something sexy. Romance is very sexy. A meeting of eyes across a crowded room. A sudden sense of connection that makes goosebumps form a pattern on your arms… That kind electricity is much more compelling in written form then you might think.

Maybe that’s because we all know what it’s like to meet someone and feel a surge of electricity. To have someone touch your hand and that simple contact make you catch your breath.

In Night School, this happens most between my main character, Allie, and Sylvain, a handsome French student to whom she feels drawn, even as her head tells her he’s wrong for her. Because she resists him, most of what happens between them is the exchange of longing glances, or short, breathless conversations in which she tries to keep her distance because if he touches her… well, she might not be able to resist him anymore.

In that way, not having contact – much less sex – becomes very sexy. Their mutual longing adds weight to every word, every touch.

One writer who does this very well is Cassandra Clare. There’s a scene in The Clockwork Angel where Will unbuttons Tessa’s glove and pulls it off just so he can touch the skin of her hand. That moment is so powerful – so filled with unspoken attraction – it fairly rips your heart out.

I admire it not just because it’s a great scene, but also because I know how difficult it is to write that sort of thing well. It’s very easy to lapse into awkwardness or to simply fail to convey the emotion that gives sexuality its power. Many writers brush over these scenes too quickly. Their lips touch, her heart pounds and… we move on.

You need to linger there. Lavish it with attention and time. We need to know how Tessa feels at that moment. How Will’s breathing changes. The things she notices about him. The unspoken signals he sends.

Done right, a simple scene in which a boy finds an excuse to tuck a strand of hair behind a girl’s ear, or a moment where a girl’s hand inadvertently brushes that of the boy she fancies, or when two characters hold each other’s gaze for a moment too long or, best of all, when they finally kiss after chapters and chapters of wanting to – can be more potent than any sex scene. And tell you more about the characters than a sex scene ever could.

Who needs actual sex when you can have that?