Zetta Jones is an ordinary girl struggling with the loss of her father, an army hero who died in mysterious circumstances.

When she receives clues that he may still be alive, but noone believes her, she embarks on a dangerous rescue across the crystal-clear waters of the Mediterranean to a clifftop castle, home to a billionaire in exile. 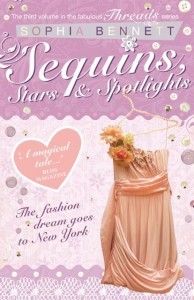 Four girls have four dreams. Crow is on the way to becoming an international fashion designer. Jenny’s been discovered by a Broadway composer. Edie still wants to go to Harvard. Nonie …isn’t really sure, but knows it’s something fashion-related and wonderful.

They’re growing up and on the brink of glittering careers. So why are their lives so complicated? Why does success demand sacrifices, and which ones are they willing to make?

In this, the final book of the Threads trilogy, Nonie discovers that life is just beginning. The girls have choices to make. Who will wait for fame? Who will emerge an outright star? Who will fall in love? And who will turn her back on all her dreams? This time the answers are in New York. It’s a long way for Nonie to travel, especially with only one teeny-weeny wheelie bag. But for the sake of her friendships, Nonie will do whatever it takes.

Moose Baby by Meg Rosoff – a clever, very funny novel about a teenage girl who gives birth to a moose. Proof – if you needed it – that novels for dyslexic readers can be satirical, witty and surprising.  Picked by Sally Nicholls whose latest novel is Close Her Pretty Eyes.

Also picked by Sally Nicholls: Rose Under Fire by Elizabeth Wein. I loved books about prison camps when I was a teenager (should I admit that here?) and this book reminded me why. Less about death, and much more about surviving with dignity and humour. Also contains aeroplanes.

You Don’t Know Me by Sophia Bennett: a clear-eyed insight into the machinations of TV talent shows and internet hate campaigns from a wholly unexpected point of view; warm, kind and chock full of positive female friendships. Picked by Susie Day, author of Pea’s Book of Best Friends.

Also picked by Susie: The Lost Girl by Sangu Mandanna: striking debut set in a near-future where the wealthy can ‘weave’ themselves a spare body. Eva is one such replacement. A Frankenstein retelling, set in the Lake District and India: chills, thrills, romance and beautiful writing.

After Iris by Natasha Farrant…it’s funny, touching and beautifully written.Picked by Caroline Green, author of Cracks.

We’re very lucky to be hosting the last stop on the blog tour for Sophia Bennett’s wonderful new book, You Don’t Know Me. We asked Sophia to tell us about the book’s (fantastic) setting. Over to Sophia…

You Don’t Know Me is set in the fictional town of Castle Bigelow. It’s somewhere in Somerset, and old market town set among rolling fields, where the many of the young people take the local beauty for granted and can’t wait to escape to the big city, where they can fulfil their dreams.

Having set four books in London, where I’ve lived on and off since my twenties, I wanted to write about growing up somewhere that feels ‘ordinary’, to its restless local teens. I certainly felt some of that, spending some of my early years in a small town outside London, and then later at a boarding school slap bang in the middle of the Sussex countryside. It was beautiful. It was boring. I wanted to be where the action was.

I based Castle Bigelow and the surrounding area on several Somerset places, from Shepton Mallet, where my parents have lived for half my life, to nearby Wells, to Frome, where I regularly visit my publisher, Castle Cary, where the station is, and even Pilton, where the Glastonbury Festival takes place. They’re all places that I’m hugely fond of. We holiday in Cornwall and I got married there. I may live in South London now, but the West Country regularly draws me back. It can be hard to find jobs and housing, but it’s a thriving, creative centre, brilliant for writing, fashion, vintage clothes and great bands and I wanted to write about that too.

The Bigelow Festival in the book is based very slightly on Glastonbury which, as a local, I get to visit on the Sunday each year, but also on the many much smaller literary festivals I’ve been lucky enough to perform at. They’re usually in country towns and the setting is absolutely gorgeous. I’m in the strange position these days of living in London and travelling outside it to do the fun stuff. The bright lights are happening everywhere.

If you want to picture Castle Bigelow, I recommend watching Hot Fuzz, one of my family’s favourite films and a work of genius by Simon Pegg and Nick Frost. It’s filmed in Wells and is a love letter to the West Country, combined with a shoot-em-up comedy thriller. If you want to see the good citizens of Wells brandishing pistols and shotguns in the market square – and I think you probably do – then this is the film for you.

In You Don’t Know Me, Sasha pictures herself joining a band and writing songs on the beach in Malibu. But if she became very, very successful, I know what she’d do. She’d invest her money in a beautiful house set in the rolling fields around Castle Bigelow, like another character in the book. She’d find herself surrounded by other creative people, as well as the landscape that’s always inspired her, and realise that in her heart, she was lucky to be able to call this place home.

It was all so good. Sasha and Rose. Best friends in a band, singing together. Right up to the finals of Killer Act when the judges tell them one of them must go.

Suddenly their friendship is put to the ultimate test. On TV in front of millions. Two girls. One huge mistake. Can they ever forgive each other?